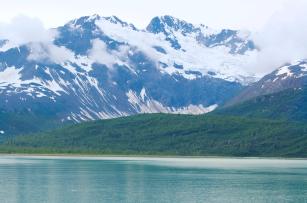 My husband Robert and I just came back from a two week cruise and land tour in Alaska. Wow, what an amazing and beautiful place! A vast sprawling land filled with massive mountains covered in snow and ice greeted us before landing in Anchorage. The following is my recount of some of the best sixteen days of my life from sightseeing and adventure to planning my travels.

Flying to Anchorage from the East Coast wasn’t an easy task, but well worth it! After a great deal of research, I decided that we would fly from Charlotte, NC to Seattle, layover one night to explore the city, then fly from Seattle to Anchorage; great choice!

Seattle bustling with busy tourists and and outdoor enthusiasts is a beautiful seaport on the Pacific West Coast. I booked the Sheraton Seattle Hotel, located right downtown in the city center. The hotel concierge recommended a handful of restaurants within walking distance. We tantalized our taste buds at the trendy Thai Ginger Restaurant. Soon after we were seated, we were informed that we were the privileged few to dine in Bill and Linda Gates frequented leather booth in the far back corner. A difficult task for a “mac” person, but I made it, whew! Our waitress shared that Gate’s body guards are able to keep a watchful eye on Gates from the second floor of the open-style modern space. After asking for help on which healthy menu items our waitress would recommend, I ordered the lettuce wraps..and I have to tell you, they were oh-sooo-delicious! An ice-cold Tsingtao made for the perfect accompaniment.

Next we set off to see Seattle’s famous Space Needle which turned 50 years old this year. Originally built as a tourist attraction for the city’s 1962 World’s Fair, the one-of-a-kind structure was meant to evoke the future. Now the future is here, and the Needle has become the city’s favorite antique, LOL. The line for tickets was only about a 20 minute wait, but the automated ticket machine near the entrance of our wait was overlooked until we noticed people behind us advancing to the new line ahead for the Space Needle. When we arrived at the elevator to take us to the top, I glanced at my iPhone time. It took us two hours and thirty minutes to get from the entrance where the line started to the elevators. Several times through the waiting process my husband and I looked at one another and debated whether we should quit and get a refund, as a handful of people did just that. Robert being the patient, pleaser that he is said, “its up to you”. Two seconds later we unanimously voted to wait it out! Captured above, the sun’s goodbye kiss to us making view just marvelous!

Time for bed, but only a few hours as our plane departed at 6:30 AM. I set my alarm for 3:30 AM, showered, and packed and off to the Sea-Tac Airport via taxi. Just three hours later we were landing in Anchorage, Alaska. Too early to check into our hotel, we decided to have coffee and breakfast with more coffee at this hip, healthy brunch place called Snow City Cafe. We took a few pics while waiting on the bench outside in memory of Robert’s once full-head-of-hair. After very little debate, I ordered the Nuevo Huevos Fried taco loco white corn tortilla, brown rice, black bean & corn salsa, cheddar, ranchero sauce, two eggs whites, fresh guacamole and sour cream; yum!!!

After brunch our Princess tour package had us staying at the Hotel Captain Cook, conveniently located in downtown Anchorage. Close to shopping, we walked to the 4rth Avenue Market Place to see Alaska Native arts and crafts, including exquisite handwoven baskets and delicately beaded jewelry and this cute bear. Moving on, just in front of the Anchorage Courthouse was a vendor selling Reindeer Sausage. I still see a picture of Bambi batting her eyelashes when I hear any word with deer in it, thanks Disney. Robert thought it was good, but I’m not keen on processed anything; however, it wasn’t bad, a bit spicy. I did learn the difference between a Reindeer and a Caribou. Do you know? The answer is: domestication and Reindeer Sausage on a stick, jk.

i/əˈlæskə/) is the largest state in the United States by area. It is situated in the northwest extremity of the North American continent, with Canada to the east, the Arctic Ocean to the north, and the Pacific Ocean to the west and south, with Russia further west across the Bering Strait. Alaska is the 4th least populous and the least densely populated of the 50 United States. Approximately half of Alaska’s 722,718[4] residents live within the Anchorage metropolitan area.

The name “Alaska” (Аляска) was already introduced in the Russian colonial period, when it was used only for the peninsula and is derived from the Aleut alaxsxaq, meaning “the mainland” or, more literally, “the object towards which the action of the sea is directed”.[7] It is also known as Alyeska, the “great land”, an Aleut word derived from the same root.